The nature already witnesses the joy of the spring in Jaipur. The flowers bloom, the wind howls and starts spreading the sand and heat all around.

It is the time of Holi, the festival of colours, happiness, rejoicing.

On the Friday 9th March, 2012, at 8 pm, the Kawa Cultural Centre in collaboration with the Alliance Francaise de Jaipur, will celebrate the spring with an exceptional concert of the Rudra Veena with Philippe Bruguière, and the Pakhawaj with John Boswell from the Cité de La Musique, Paris. 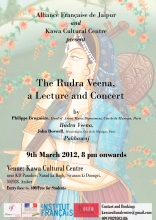 Musician, ethnomusicologist, curator and teacher, Dr. Philippe Bruguière has proven himself, over and over again in the last twenty years, to be a key figure on the landscape of Indo-French cultural and scientific cooperation.

Dr. Bruguière has been the curator of Asian music at the Musée de la musique since 1994. Prior to that, he was the curator of musical department at Musée Guimet.
Curator of the 2003 exhibition “Inde du Nord: gloire des princes, louange des dieux”, Philippe Bruguière also programmed the season around the Indo-Persian confluence in music and dance that accompanied the exhibition at the Cité de la musique.

As a musician, he studied for ten years under Ustad Zia Mohuiddin Dagar, the rudraveena, the oldest musical instrument in Hindustani music. He has performed in France and in India.

London born and Paris based, John Boswell is a reputed percussionist.

He was trained under the renowned musician Kenny Clarke and has been part of various jazz and rock bands. He has studied the tabla and the pakhawaj for seven years under Pandit Kishan Maharaj, Pandit Ishwari Lal et Pandit Amarnath Misra in Benares.

John Boswell is a teacher of Indian percussions at the Cité de la Musique and at Conservatoire Départemental de Musique of Evry.

He composes music for cinema, theatre and dance. He has collaborated with Carolyn Carlson, Marie-Claude Pietragalla, le C.N.S.A.D. of Paris and also with the composer Armand Amar for Yann Arthuis Bertrand ; Radhu Millaheaunu and Gilles de Maistre.  He plays for the performances of Bruno de La Salle.

Looking forward to seeing you here!